Now that you’ve got some blogging experience under your belt, re-write your very first post.

“Mrs. Human I think we being insulted. We were born with blogging experience, we invented blogging in the old country when Bastet was trying out the first experiments in the corn chambers.”

“I know Tabby and Fluffy, and Nera who has returned to the eternal corn chambers, being the righthand of Bastet. Not all humans are as intelligent as felines and do not run out of ideas. Luckily I have an old blog on the computer, which is so old I forgot you wrote it. Where you again show the advanced feline gifts. Shall we repost it?”

“Yes Mrs. Human, but not rewritten. We felines do not rewrite, we are too intelligent.”

“Agreed Tabby and Fluffy (and Nera hovering in the feline stratosphere), so here we go. 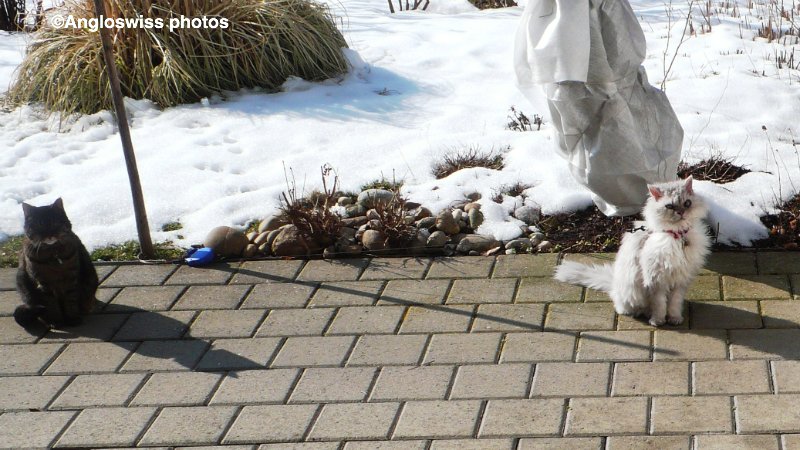 And the rain kept falling as it if would never end. Roswitha stood at the door being almost mesmerised by the unending threads of water. She looked down at Alpha, her cat and familiar who was also blinking through the raindrops and not looking very enthusiastic about the weather.

“Alpha, what do you think, can we do something about this rain.”

“If cats with my abilities could do something about the rain, we would have abolished it years ago, but it is forbidden for us to play with the elements. You have to make sure that no-one is looking and there is always some old wise cat that sees everything. You know like what’s-her-name in Egypt.”

“Yes, that’s the one; so what about you White witches, any bright ideas?”

“No, Alpha, same here. No messing with the elements, just with the exception of fire, and keep your magic on the good side of life. Grandma said I had the gift from her and should use it properly.”

So the rain continued. Roswitha and Alpha were glad there were no old men with long white beards collecting wood and animals two by two. That had happened once and that was boring. Alpha’s ancestor was one of the chosen few on the ark, and she passed the message down through the generations that it was not fun being surrounded by water for weeks on end. She had to sit on the edge of the boat to do her business clinging with her paws on the wood to make sure she did not fall in, but that was an old story, and who knows what really happened. Those legends being handed down over the years lose a lot of reality.

“Life is so boring Alpha, I just wish I had a knight in shining armour to take me away from the monotony; just a little bit of excitement in life.”

It was then that Roswitha heard a strange noise. As if the brass section of an orchestra was approaching the door.

“So, here I am, let me in, my armour is starting to get rusty in this rain. Where shall we go?”

“I beg your pardon, just who are you?”

In front of Roswitha stood the figure of a man, quite tall and clad in metal from head to foot, with just a slit for his eyes. He had a cloth in his hand which was enclosed in a chain mail glove, and was drying the rain drops from his armour quite vigourously.

“You sent for me madam, your knight in shining armour. That is why I am polishing it all the time to make sure it keeps shining.”

“Well you said how life was boring and you could do with a knight in shining armour, so I organised it. No problem, they had them in stock on the requirements list.”

“Alpha that was metaphorically speaking; I did not really need a knight in shining armour, just something to break the monotony, to help me against this rain.”

“Then my services are not required?” asked the knight “this is a nuisance. There I am polishing my armour, waiting for a chance to be called up for duty, and now I am not needed. You should really keep your familiar under a better control. You witches are all the same, the white ones are the worse. At least you know where you stand with the black witches. They are evil and selfish and it is clear that we are called upon for a purpose. White witches always want to be the do-gooders – just cannot decide and we are sent back and forth all the time. I will have to make a report on this when I get back to the stock room.”

He left Alpha and Roswitha still muttering on the way about his good will being taken advantage of and White Witches being ungrateful.

“So that was not a very good idea Alpha. Just think before conjuring something up in future.”

“Well I was only trying to do you a favour, and it did brighten things up on our rainy afternoon. Now what about this for the help you mentioned.”

There was a whoosh and a strong draft blew into the open door, accompanied by a cataract of water drops caught in the wind. There he was clad in blue tights covering his legs with a long armed blue pullover close fitting to his body, at the front of the pullover a large Superman emblem. To complete the picture he carried a red cape over his shoulders.

“At your service. Are you the lady in distress? How can I help you? Is this cat attacking you?”

“Cough, cough cough, first of all I need a towel to dry my hair and clothes from the rain that has just been swept into my house. ALPHAAAA enough, the last thing I need is Superman. Sorry, but I have no problems for you to help with. Perhaps you could remove my cat, but no, on second thoughts I will deal with her myself.”

“Today I can’t do anything right. Roswitha, just express yourself properly. You said you need something to help you against the rain. Was that metaphorically speaking as well?” said Alpha

“No it was not, Alpha, but I thing that Superman help is more for national catastrophes and not for a shower of rain.”

“Indeed cat and lady. It really seems that I am uncalled for in this situation. Please think before acting the next time, I was just having a coffee break with The Joker and he does not take things so easy when disturbed. Now I have a lot of explaining to do.” And with that he flew off, the rain parting like a curtain as he left.

“Sorry Roswitha, but” and Alpha was interrupted by an angry witch, even if she was one of the white sort.

“Alpha I have had enough, so here is a spell from me. You will be silent for the next hour.” And with that Alpha just sat watching the rain, her voice remaining still.

“Help, please help me” cried a voice coming nearer to Roswitha’s house. It was then that she saw the figure of a man limping and just as he reached the door he collapsed on the ground.

“Alpha, is this your doing again?” she said, but Alpha gave no answer, he had been doomed to silence.

Roswitha bent down and took a closer look. The man was breathing, his eyes open and he stretched his arms out. Roswitha did notice that he had the most beautiful brown eyes as she looked into them. But no, this was again Alpha’s doing, she was convinced. The man spoke further:

“Please help, I was driving down the road at the end of the lane and my car skidded on some mud. It crashed into a tree and I have injured my leg. I just managed to reach your house.”

“Your car skidded on the road. How unfortunate, but there is nothing I can do about it.”

“But perhaps you could have a look at my leg, call a doctor or something.”

Roswitha just did not know what to do. Should she help a complete stranger, who might have been sent by her cat, Alpha, or shut the door and ignore him. She was just about to shut the door when Alpha put his paw on the door and pushed it back. Was this a signal? Was this man genuine? Roswitha made her decision. She helped the stranger onto the settee in her living room and brewed some herbal ointment for the injury on his leg. In no time the wound was no longer so painful and the stranger could stand again on his leg.

“Thank you so much” he said. “Let me introduce myself. My name is John Carruthers and I was on my way to my estate in the next village when this unfortunate accident happened. I am forever in your debt. How lucky I was to have found your house. I must say I have never had such a pretty nurse as you are. How can I replay my debt?”

“No, no, please, it was no problem. I am glad to have been of assistance.”

“Could I perhaps call one of my servants on the telephone to organise the towing away of my car by the local garage. I can also organise someone to pick me up.”

“Of course you can” answered Roswitha, “but perhaps you would like to have something to eat before leaving. I was just preparing dinner.”

“I really don’t want to be of any more bother.”

Roswitha was sure that this charming surprise visitor would be no bother, and so it came to pass that they had dinner together, John Carruthers enjoying the company of his rescuer. Eventually he left, being picked up by one of his servants, and the car was taken to a garage. During this whole episode Alpha remained silent, but the hour had passed some time ago.

“Alpha, your hour of silence has finished. Are you not talking to me any more?”

“Of course, Roswitha, but I thought I would just let you get on with it. It seems your afternoon was quite interesting and eventful.”

“You see Alpha, I managed that all on my own. That is the way we white witches do things. We leave it to coincidence and don’t arrange surprise visitors from the local magical stock room.”

“Yes, of course Roswitha. You are the boss” was the answer from Alpha. Alpha just thought to herself how lucky we cats are to have the gift of telepathy, and thank goodness there was one of those men in distress in the stock room waiting for his chance in real life.

Daily Prompt: Hindsight – a good night story for my felines