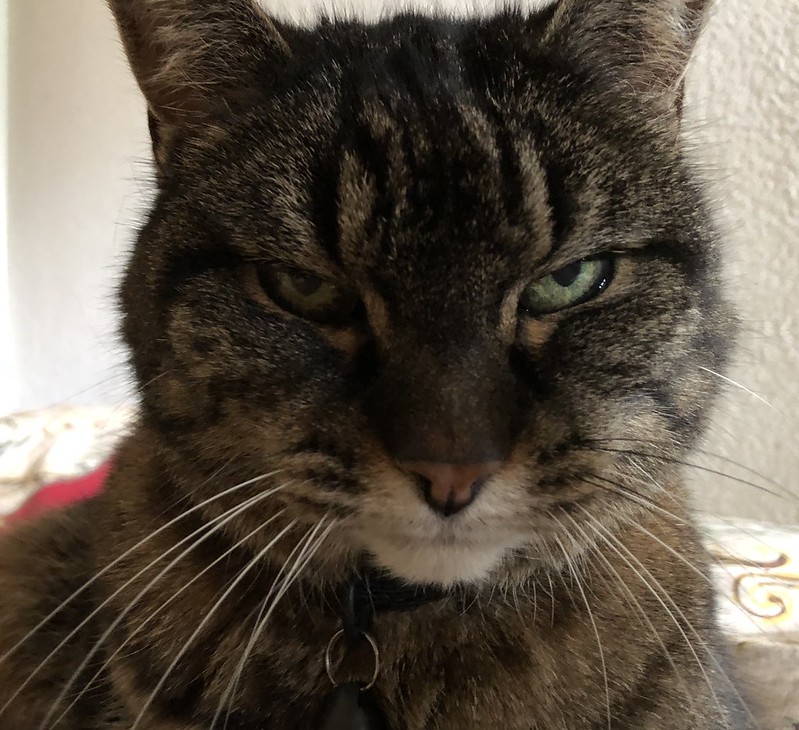 See the “M” on my forehead. That shows how exclusive I am. Of course I can trace my family to the days when our teeth were the most important part. We were the sabre toothed felines of the olden days. We roamed the mountains and all were at our mercy. We kept the dogs as pets and fed them on the scraps we had left after eating  the mammoths and wolves.

As time progressed the humans descended from the trees and they began to hunt which was  quite useful as we decided to let them get on with it. Why work for your food when the humans do it for you. It was when Bastet arrived on the scene that things got organised. My mum said she was my ancestor, but I discovered that all feline mums tell the same story. We always had a weakness for mouse meat, and what could be better than organise the felines to rid the corn chambers in the old country of the mice. The humans were happy and so were we. Unfortunately the humans got the wrong end of the idea, and decided we felines were their servants. Actually it was the other way around and so we are still fighting for our rightful place in society.

In the meanwhile there were a few felines in my family line that we do not talk about: they dealt in the mystic arts and they went through fire and flames before departing. A branch of our family were also slightly strange. They lived in a place called Transyvannia. We don’t have any family photos, but somehow it was not possible, they didn’t even have reflections in mirrors.

My family was a little mysterious I suppose, but we all have the “M”, and that is important. It means magnificent, mighty, marvellous and  miraculous.