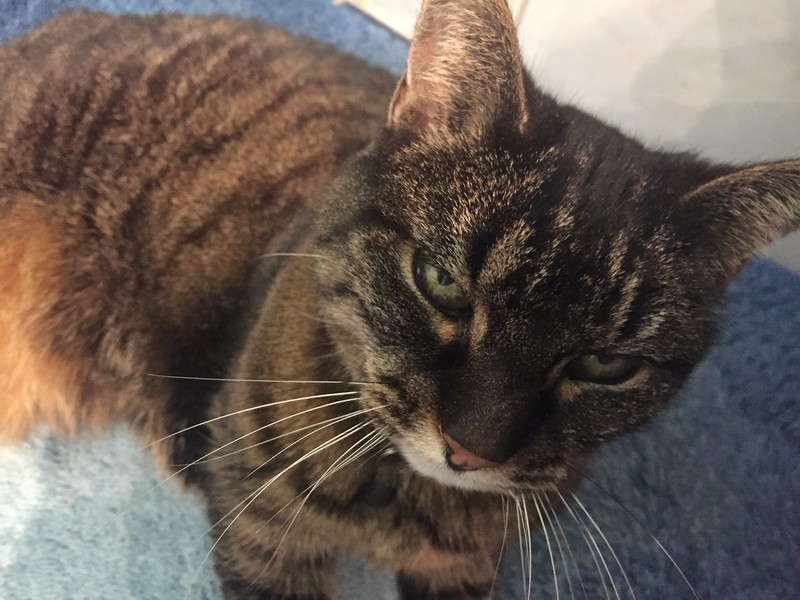 “Tabby you don’t look so jolly.”

“Jolly does not exist in meow. The face muscles are not able to do jolly. The only smiling feline I have ever seen is the Cheshire cat and he was only in a film. Just imagine a feline smiling all the time, expecially as we do not have a lot to smile about.”

“But of course you do Tabby. It will soon be Catmas when the jolly Santa Cat pays you a visit with all your heart’s desires.”

“It’s all fake news Mrs. Human. There is no Santa Cat, because he does not have opposable thumbs. No way can he fill a sack with tins of tuna fish, he cannot even open them. Not to mention preparing catmint toys. Felines do not do toys, we just use various objects for exercise. Of course getting high on catmint is always somethig to excite the whiskers. So what are you organising for my catmas this year Mrs. Human. Have you got everything ready?

“But Tabby, it is the Santa Cat that organises it all.”

“Pull the other paw Mrs. Human, it has bells on it.”

“You mean you don’t believe in Santa Cat.”

“My mum told me stories about him, until she met Charlie. She then said to avoid all male cats, they are only there when they get what they want. They do not hang around afterwards. I never had a feline I could call daddy. He was long gone before I arrived. And mum really thought that Charlie was the man of her life. She said they had some jolly moments on the rooftop, but then the neighbours next door were adopted by Laeticia. She was the one with the long eyelids and sexy meow and that was that. He dumped mum and was off on a different roof top. Although mum did say that he dumped Laetitia as well eventually. There were too many kittens hanging around calling him daddy.

And now Mrs. Human, you must hurry, only a few days to Catmas and you must organise my gifts. Don’t forget my Versace food bowl this year. All the cats in the neighbourhood will be jealous, they eat out of the normal average supermarket bowl with the Cheshire cat photo. Don’t foget felines do not, and cannot smile and jolly does not exist in our vocabulary.”