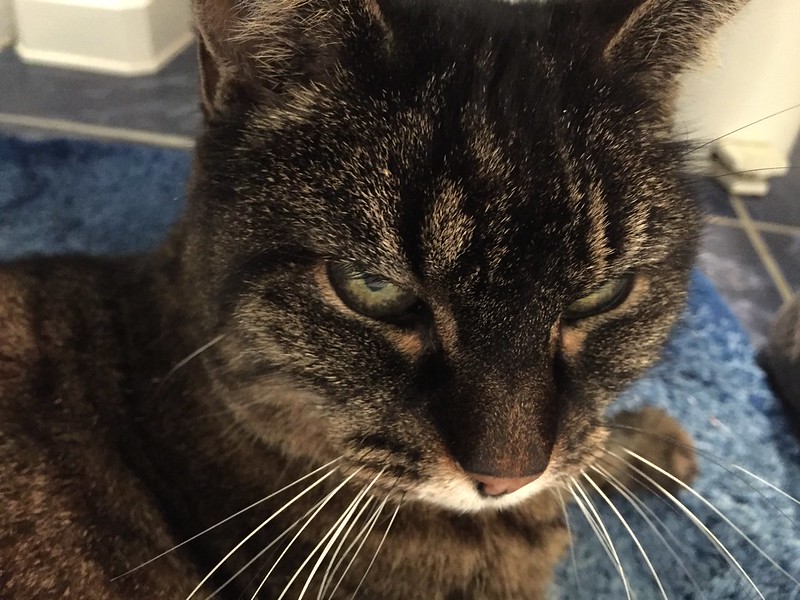 “Mrs. Human, where is my squeaky mouse.”

“You mean the one that only had one ear, because you tore the other ear off with your claws.”

“Yes, that’s the one. He was full of catmint. I feel an urge again.”

“Tabby, keep your addicions under control. I threw that mouse away last year. It began to smell and the filing was falling out of the place where the ear was.”

“I am not addicted to anything Mrs. Human. I just enjoyed the feeling I got in my whiskers when I put my nose into that mouse. I felt as if I was floating.”

“Yes Tabby, that is what we call getting high. I remember, you began to roll around on the floor and your eyes grew bigger.”

“Of couse I was rolling on the floor, that was feline exercise. If you turn the lights off my eyes always get bigger.”

“No excuses Tabby, you were becoming addicted to that mouse, I am sure there was a special mixture of catnip in it.”

“That might be because I got an extra harvest from the feline next door. He had the real growing plant in the garden and was offering it around, that was really something. We rolled in it for hours. For a tin of tuna fish, he gave me a whole branch. I shredded it and mixed it with the catnip in the mouse.”

“Oh, I see, dealing in the back yard is not very good. Now I know why the ear was removed from the mouse.”

“It was all in the cause of a better life style Mrs. Human. Perhaps you could plant some catnip in the garden next year.”

“No tabby, it doesn’t work. I planted it once, had at least 10 cats inthe garden rolling in it and getting high and the next day it was kaput.”

“Perhaps you could plant it in one of those big pots, just for my own private use. I would only pass it on to my closest feline friends.”

“No tabby, does not come into the question. That is called dealing.”