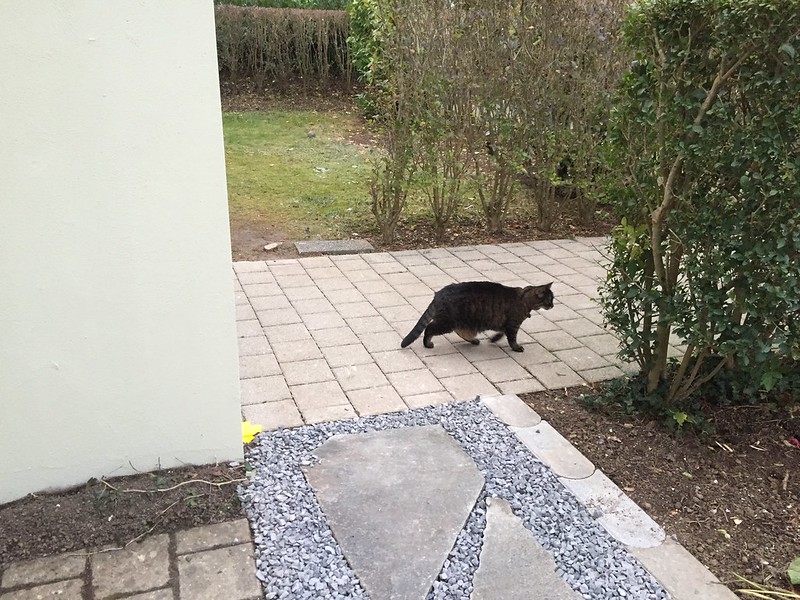 I now have my own private entrance to my territory. I told Mrs. Human that this could not go on, I deserved more attention and better living conditions. I do not know where she gets her ideas. At last she has organised a suitable path for me.

It was not easy to persuade her, but she designed the exit according to my plans. It is very paw friendly.

“Where are you going Tabby?”

“Exploring my territory Mrs. Human, there are places to see.”

I thought I would visit my friend, the wall, we have many interesting conversation. Humans have destroyed him, removed him, they said he was a victim of the mushrooms. I noticed them growing out of a crack in the wall, but the wall was feeling ok. It then began to rain. I only like water that comes from the ground, but water falling on my head is an omen, because the sky might also fall on my head.

The wall also did not like the rain. It prefers the dry weather. I was staring at the wall and the wall stared back and then I saw the mushroom growing between the ground and the wall. It continued to rain and more mushrooms began to grow. The wall stood its ground but I noticed it had begun to crumble at the edges. It was then that the men arrived and killed the wall. The wall groaned as it fell and they gave it no chance to defend itself.

I wanted to help, but what can a mere feline do, my wall had been killed and has now been buried together with the mushrooms.

I am now very careful about washing myself regularly. Mushrooms are dangerous. If they can kill a wall, they can kill anything. Mrs. Human eats mushrooms, shall I warn her. No, she is there to protect me and can look after herself.