How would you get along with your sibling(s), parent(s), or any other feline you’ve known for a long time — if you only met them for the first time today? 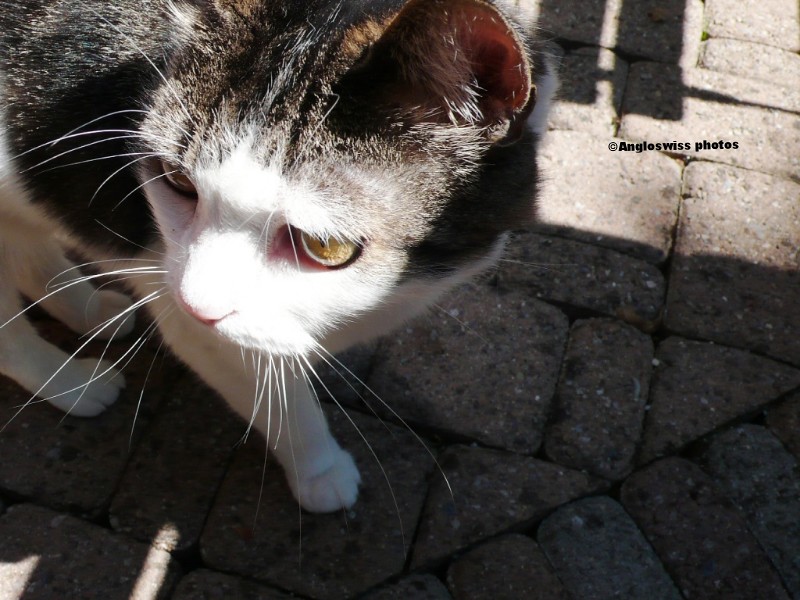 “Who is that Tabby?”

“No idea Fluffy, never seen him before.”

“Then what is he doing on our blog.”

“I think it was a Mrs. Human idea like meeting a feline for the first time today.”

“Sounds a stupid idea. I do not even like felines I have known for a long time. I mean take Roschti. He has been hovering around in his red and white fur coat since we took over and he still hasn’t taken the hint that he is unwanted.”

“I don’t think Roschti likes us either Fluffy. He tells everyone we smell and our whiskers are not the right colour.”

“Roschti does not smell, he stinks, and I don’t have any whiskers Tabby, so he it seems his intelligence quota is also not so high. But tell me Tabby, what would you say to your dad if you met him for the first time today.”

“Any other stupid questions Fluffy? I have never met my dad, he left my mum to get on with it from the beginning, so how can I say anything to him. If I met him I would not recognise him and I am sure he would not know me. And what about your mum and dad?”

“Of course I know what they look like. My dad was Cool Man and mum was Lucy.”

“But would you recognise them in fur and whiskers Fluffy.”

“I recognise them on the photos.”

“But you cannot smell a photo Fluffy.”

“You mean if they would cross my path in real life. Oh, I would have to think about it. My dad did have blue eyes.”

“So does near every Persian and Siamese feline, and your dad was not one of those. How many kittens did he father?”

“Well there were about 10 of us where I grew up, but only three were my real brothers and sisters. The rest just sort of arrived, but Cool Man was the daddy of them all.”

“You see Fluffy, I never knew my dad and I am sure he cheated on my mum.”

“I suppose he did and don’t forget after dark, all cats are leopards.”

“What has that got to do with it Fluffy?”