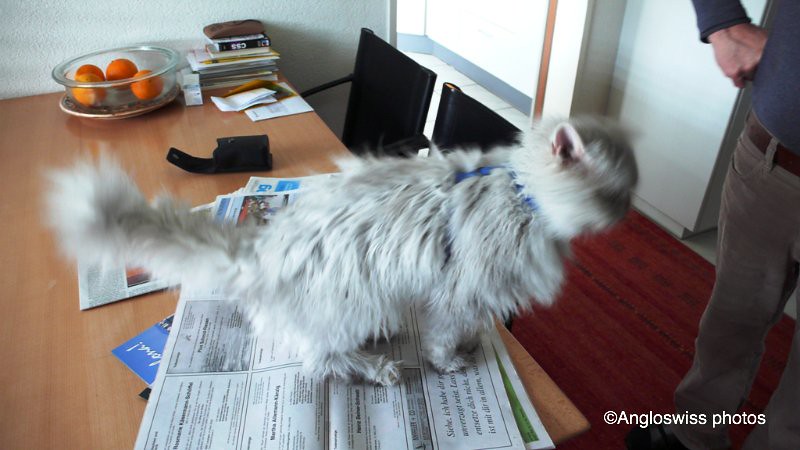 “Fluffy are you actually reading the newspaper, I though you were blind.”

“Mrs. Human, what is blind? Blind does not exist in meow. And yes, I am reading the newspaper. I can feel the print through my delicate paws. I think it is called braille in human, but for me it is paw print.”

“And you understand everything that is written in the newspaper.”

“Oh yes, especially the advertisements. There is a big photo of a tin of tuna fish and it is written that you can buy two for one, meaning half price. Have you read that Mrs. Human?”

“No not yet. I saw that tomatoes were on a special offer, and I will buy a few kilo.”

“Err Mrs. Human, I think you are reading the wrong page. We felines do not eat tomatoes.”

“But we humans do Fluffy.”

“Then when you are buying your tomatoes you can take advantage of the special offer and buy some tins of tuna fish. Oh, look Mrs. Human, the TV programme says that the film “Garfield Saves the World” will be showing this evening. Do not forget to record it.”

“I did not know that Garfield saved the world Fluffy.”

“Of course he did Mrs. Human. A special cat killer bird was developed by a mad human scientist and Garfield found where it lived. It was in a bird house looking exactly like the one we have in the garden.”

“But Fluffy, how do you know what our bird house looks like when you are blind.”

“Tabby described it and I took a walk around it and measured the exact paw lengths. Tabby said that we must watch that film. After Garfield kills the evil bird with a drone he developed, he eats it and then he gives instructions at the end of the film on how to build a bird killing drone. Oh Mrs. Human, we must watch that film, otherwise we will miss something important. For me it is very important as I have this blind thing. If I had a drone it would kill the birds for me.”

“Fluffy it is not absolutely necessary to kill birds, you can eat your wonderful dry vitamin enriched pellets, they are far more healthy.”

“Mrs. Human, I don’t do healthy, I want a bird. You eat chicken, and I eat sparrow – where is the difference? I am not fussy, you do not even have to cook it. I can eat it raw.”

“Fluffy do some paw reading in another part of the newspaper. There is an article about our new President.”

“No, I don’t think so Mrs. Human. As long as we have Bastet we do not need a president. She points us in the right direction. Don’t forget the god worshipping thing we had in Egypt at the beginning of feline civilisation.”

Sometimes I have the feeling that having a conversation with a feline is very rewarding. We humans can always learn something.