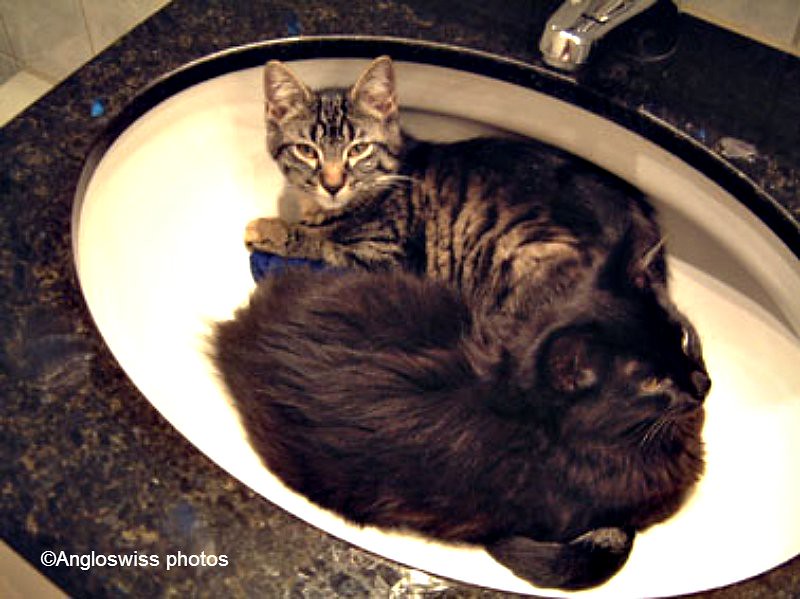 Tabby reporting from the lair. Mr. Angloswiss thinks it is her lair, so I let her believe it. Humans get worked up and fussy otherwise, but we took over – must be a God thing, you know the Egyptians, Bastet and all that.

Anyhow talking about first, it is a matter of interpretation. When I was progressing from kitten to cat I knew there was something wrong somewhere. I had a litter sister, Nera, who in the meanwhile has gone to the eternal corn chambers as righthand to Bastet. She did not want to do rainbow bridge which is just a kitten story to keep the kittens happy. No, she was the boss, although there is a little misunderstanding. You can see us both in a sink photo. She is the big one at the front pushing me into the background.

You see there were four of us all comfortably squashed together inside mum. One day there was no room and we had to leave one by one. I was actually at the front of the queue. I mean tabby cats are so original and with our MacDonalds “M” on the forehead we are something special. I should have known then that the long haired black kitten laying next to me had other plans. Now and again she gave me a kick with her back leg and once she even tried to strangle me with her long bushy tail. At the beginning it was OK, but as she grew, she got bigger and fatter and basically she was the reason why we had to leave. There was no more room in the cat mother.

So the day arrived and we saw light at the end of the tunnel. I was ready to hop out and hang onto the next free milk tap when I heard a growl behind me. Something squeezed its way forward, giving me a push with its hind leg and hopped out in front of me. That was Nera, who became Queen of the litter. An usurper, it should have been my place. I suppose no good crying about spilt cat milk, she was born to be a leader.

When we were kittens she was always first on the tap, although we were only four, so there was enough to spare. I remember when she saw her first mouse. “Go and catch it for me” she said and her being No. 1 I did. I would even have eaten it for her, but then she put her paw down. “No, it is my mouse” and she swallowed it in one bite, leaving the tail end as being not cat tasty, and so there I was, No. 2 again.

I might not have been the first to arrive, thanks to Nera, but she was the first to go. I still miss her now and again, her bossy way, her swaying overweight walk due to being always the first at the food bowl, and her squeaks of rage if someone was in her way, but she still pays a visit some time in the night and then we reminisce. “Remember when I caught a bird” or “I was the first to chase that ginger tom out of our territory”. She was not the first, but that was Nera. She was the first to appear and just because of a hind leg kick.

Daily Prompt: First – The Importance of being first feline