You wake up one morning to find a beautifully wrapped package next to your bed. Attached to it is a note: “Open me, if you dare.” What’s inside the mystery box? Do you open it? 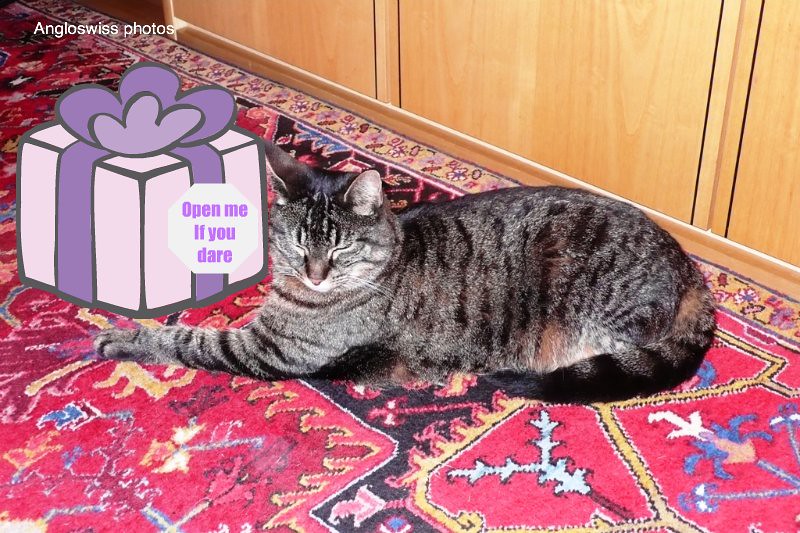 “Forget it Fluffy, no way.”

“But Tabby, it looks interesting. Might be full of tuna fish, or salmon, or even caviar.”

“Fluffy you are young and a simple feline, you are not as experienced as a wise tabby feline like myself. There are things to know and one is very important, an old saying handed down from feline to feline over the year, since the days when we were worshipped as gods in the old country.”

“Fluffy, we are still gods, only many have forgotten. We still control the human influence, but in a subtle way to make them think they are always one step ahead.”

“True Tabby, one of the reasons why we have so many muscles in our ears. We can twitch and turn them to suit what we want to hear. But tell me about the wise saying.”

“Are you listening Fluffy, “curiosity killed the cat.”

“Fluffy you are really a little slow sometimes. Must have something to do with your Selkirk Rex origins.”

“Tabby I am proud of my origins. It is not every feline that has curly whiskers.”

“Yes Fluffy, they do have the appearance that you put your paw in an electric socket, if you still have them. Today is a good day, I count three curly whiskers.”

“It is all part of my genes, the Selkirk Rex inheritence.”

“You do not sound very convinced.”

“Sorry Fluffy, but your type is a fluke of nature. So now to open the box.”

“But you said something about curiosity killing something.”

“Forget it Fluffy. Since when do we cats fear what could happen. We are ruthless, brave and look our fate in the eyes. The parcel is from Mrs. Human, so it will not kill us.”

“Are you sure, you were sleeping when it appeared.”

“I do not sleep, I contemplate and Mrs. Human knows we felines love parcels.”

“But what is in the parcel, can it kill us?”

“Fluffy the parcel is empty. It is a parcel with lots of paper and a cardboard box and some scratch free ribbons.”

“Yes Fluffy, my Christmas wish. I would say you can have half of the paper to tear and roll in and I will kill the rest. Afterwards you can have fun with the ribbon and I will chase you to tag along, but there is one thing you must remember. The box is mine. I want to creep into the box and sit in the box and hide from everything.”

“You can have the lid, you are smaller.”

“Do I smell catnip Tabby.”

When I returned to the package it was completely destroyed, ripped remainders strewn over the carpet and Fluffy with the bow wrapped around her tail. Two felines were high on catnip, one sitting in the box and the other in the lid of the box. Happy Catmas felines.